We Want to Hear Your Voice 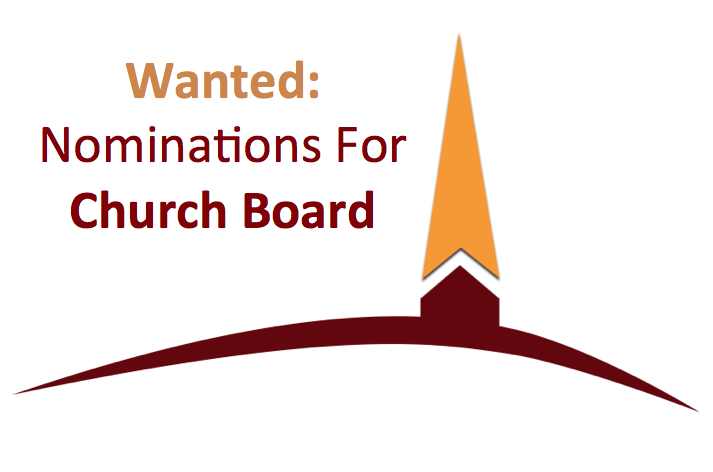 We are entering the last quarter of the year and this means that the Discernment Committee will begin working on the Church Board slate for the congregation to vote on in late January of 2018.

In 2018 the Church Board will be made up of 12 voting members. 4 of them will be appointed by virtue of their position:

It is the responsibility of the Discernment Committee to submit a slate of approximately 6 names for the congregation to vote on in January. And so the DC is about to begin this process.

What is the process for coming up with the Church Board Slate?

It all begins with you, the congregation.   Every October the Discernment Committee looks to you to submit your nominations for Church Board.  You may also nominate yourself if you have the desire to serve on the Board.

We also look to those serving on the Discernment Committee to submit nominations as well.   However the DC would very much appreciate your input (your nominations) for they are your representatives.

Once nominations have been received the DC begins to discuss and pray, seeking the Lord’s direction. Eventually each member of the DC submits a ranking order and after the results are tabulated there is a defined list to work from.   Nominees are approached in ranked order until there are enough names to make up a slate.   The slate is presented to the Church Board for approval and then to the Congregation.

In the weeks leading up to the election, biographies including pictures, testimonies, ministry experience and vision are sent out to the congregation so that we can become more informed regarding each of the candidates.

What are the Qualifications for serving on the Church Board?

According to the bylaws of the Brethren in Christ Denomination (found in the Manual of Doctrine and Government): All members of the board are to give a personal testimony of salvation, manifest a concern for congregational growth, and should demonstrate responsibility with evidence of being in agreement with the purposes and goals of the BIC U.S., the congregation, and the pastor. Men and women are eligible to serve, with membership in the congregation being a prerequisite for membership on the governing board.

How do I submit a nomination?

Please submit any nomination by speaking directly to any member of the Discernment Committee or simply sending any member an email with your nominee(s).