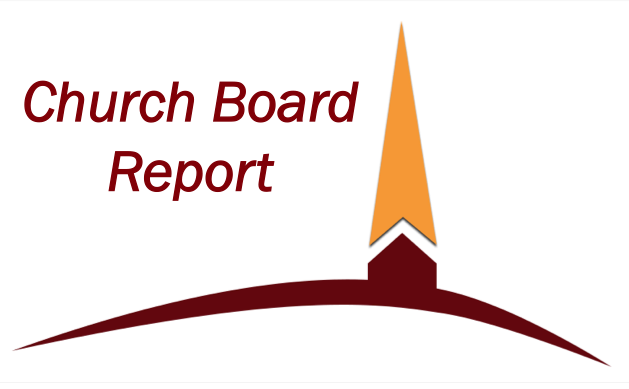 Your Church Board meets the first Thursday of every month (with the exception of July and December). Here is a report from last week’s board meeting:

Pastor Ray gave a brief report from General Conference that was held in Florida in early July: Our conference (Allegheny Conference) now includes congregations from Virginia who had been part of the Southeast Conference. Discussion also took place regarding a possible name change for our Denomination; no change appears to be imminent.

Pastor Bill reported that giving continues to be encouraging as June and July were 2 of the strongest months of 2016.  He also reported that at our current pace, the loan on the 2010 expansion (Auditorium/Children’s Wing) should be paid off in the Spring of next year (2017). He also submitted to the board a list of 38 individuals/families who have started attending Five Forks in 2016. These 38 will be receiving invitations to a luncheon and tour of the church hosted by the Pastors on Sunday, October 30th.

The Worship Director Search Committee has narrowed the list of candidates for this position down to two. Both are from outside of the local area and steps are being taken to have our musicians and board members meet with both of them in the near future as we continue to seek the Lord’s direction for this position.

The board granted a request from Jody Martin to approve a support group called “When the Storm Rages”. More information will be coming out regarding this women’s ministry.

For the past several months the board has been examining the structure and function of the board.  As the staff has grown and continues to grow, there reaches a point where having all staff members present at every board meeting is not a necessity.   The board took action on the following: Starting in February of 2017, the Youth Pastor, Children’s Pastor and Worship Director (if applicable) will only attend meetings as deemed necessary by the board. Monthly reports will continue to be submitted to the board by those holding these positions with at least one face-to-face meeting with the board taking place every year. Discussion on structure/function of the board will continue in the months to come.